My goal with this Britney Spears Las Vegas Show review of Piece of Me is to help you decide if you should buy tickets or not. I grew up singing Britney’s songs so it was great to finally get to see her concert. One of my friends won a trip to Vegas which included tickets to Britney’s show and a two-night stay at Planet Hollywood. Britney’s show takes place at Planet Hollywood. It was great to be able to get from our room to the concert venue in under five minutes. The Axis theater where the show is held is inside the Miracle Mile shops which are connected to Planet Hollywood. There are a variety of choices near the venue where you can eat before the show. Once you go through security you can get your picture taken in front of a backdrop with the name of the show. The backdrop is nothing special but if you wish to purchase the picture you can do so after the show for $25.

Inside the lobby of the theatre, you can find Britney merchandise. There is also a Britney store in the mall close by the theater. You might want to stop in the store before the show just to get an idea of what they have. If you end up liking the merchandise the mall has better you can always buy it the next day.


Throughout the lobby are costumes that Britney has worn during her career. I saw her flight attendant outfit from the Toxic music video and the dress that she wore on Star Search. At the concessions stand you can purchase a souvenir cup with the name of the show on it. I didn’t want to buy a drink just to get the cup. However, so many people left their drinks behind after the show that I was able to grab an abandoned one on my way out. It is the perfect toothbrush holder in my bathroom.

The last time I went to a concert with a friend with free tickets our seats were in the last row. I was pleased to see that our seats for Piece of Me were in the first section behind the pit & VIP area. My seat was in section 102 row h. If you can get a seat in the center near the aisle I would recommend that. The rows are very narrow and once the show starts it is hard to climb to a seat in the middle of a row.

Piece of Me is roughly a ninety-minute show. The show started around 9:15 pm – 9: 20 pm the night that I saw it and was over before 11 pm. It is not as long of a show as I would have liked but it is still a great one. Britney gives a high-energy performance and covers a majority of her big hits during the show. The only disappointment is that she lip-syncs her show. The show is still great even though she isn’t singing live but I think that is important to know before you go. 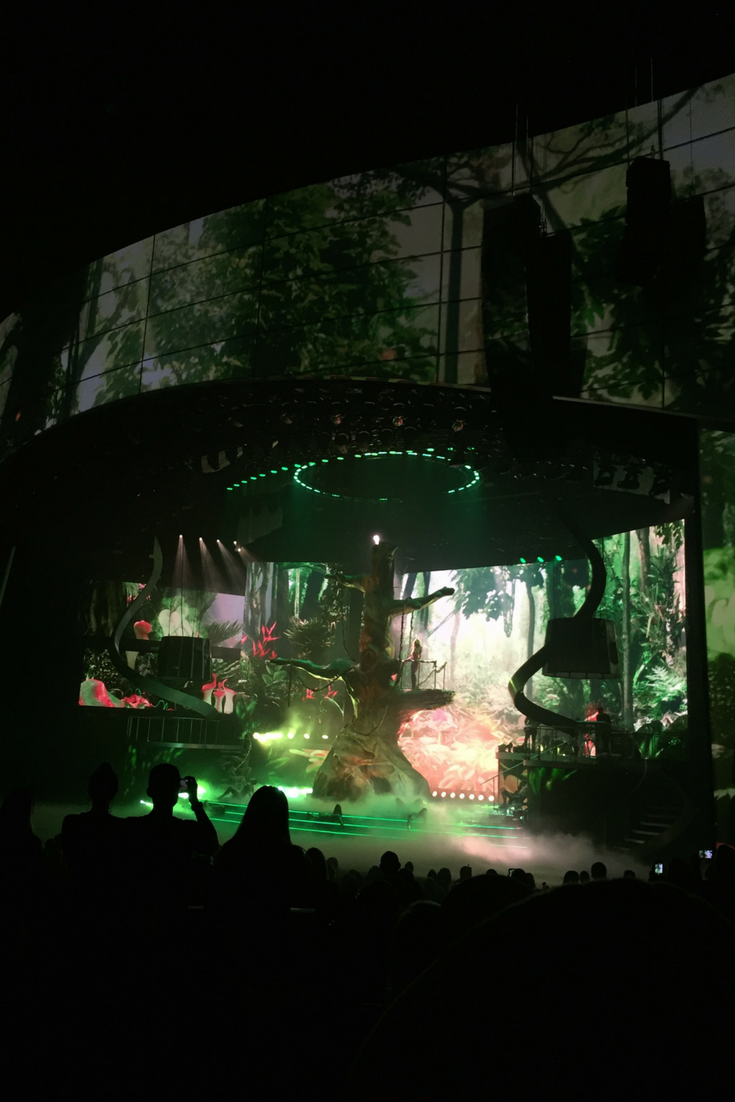 Britney may lip sync but she dances her heart out on stage. I had never seen her in concert before this show so I don’t have anything to compare it to. However, I cannot imagine that the shows she puts on during a concert tour are anywhere near as elaborate as her Las Vegas show. The sets that appear throughout the show are incredible. The set designs are one of the best parts of the show. The attention to detail is fabulous. Tv screens line the top and sides of the stage. These screens are entertainment for the audience during set & costume changes.

I have had Britney songs stuck in my head ever since I saw the show and I am not complaining one bit. Her songs are so catchy and fun to sing along to. It was surprising to me how many people stayed seated during the show. My friend and I had so much fun dancing and singing throughout the show. We only sat down during the set and costume changes.

Would I recommend seeing Britney Spears Piece of Me Show in Las Vegas?

If you are a big fan of Britney Spears I would recommend seeing the show. For the best possible experience, I would recommend getting a ticket for the pit if you can afford it. If you get a pit ticket arrive when the doors open so that you can be as close as possible.