Yesterday I was blessed with the opportunity to attend the first-ever AUTFEST. What is AUTFEST? It is an international film festival that was created to celebrate the role that films play in autism awareness. The festival was held at the AMC theatre in Orange, California. I was interested in attending so I started looking for information on tickets. As I was doing my research I found the AUTFEST twitter account, entered a contest, and ended up winning two festival passes!

I was so happy to get to bring my friend Marilu with me because she loves watching movies just as much as I do! We were unable to make it to any of the screenings on Saturday. However, we were able to attend two screenings on Sunday which was the last day of the festival. The first screening that we attended was for the Pixar movie Inside Out. As some of you know Inside Out is not a new movie. It was shown at the festival because of the impact it has had on people on the autism spectrum. The way the film explains emotions has meant so much to a lot of people. 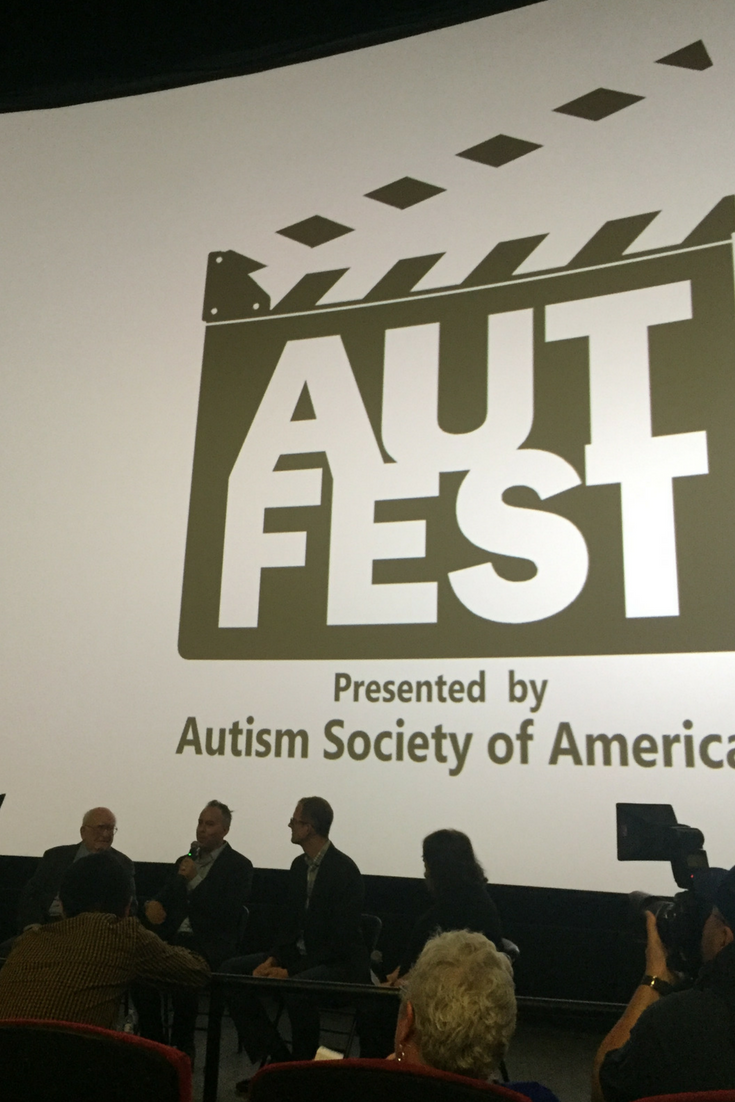 Inside Out’s producer, Jonas Rivera and writer/co-director  Pete Docter did a q&a after the movie. Pete got the inspiration for the movie when his daughter turned eleven. They worked on the movie for five years before it was finished. Originally, they had more emotions that they were going to show in the movie but felt like a lot of them could be combined into one. One of the other emotions they considered adding was Pride. However, they decided that Pride could be added to Joy’s character.

Another interesting fact that they shared was that the focus of the story at the beginning was Joy and Fear. As they were working on the movie they realized that it would be a much deeper story if they were to focus on Joy and Sadness. Some of the other fun things that we learned were that the shape of each emotion had to do with what they represented. For example, disgust is not only green like broccoli she is shaped similar to broccoli. Joy was shaped like a star.

During the q&a Ed Asner, who worked with Pete and Jonas on Up, joined in on the discussion. Ed, who has a son on the autism spectrum, is one of the people who helped make this festival possible. He spoke about his experience on Up and shared that Joy from Inside Out reminds him of Mary Tyler Moore.

Following the screening, Pete and Jonas were presented with an award. Ed’s son Matt, who works for the Autism Society of America, is pictured on the left. 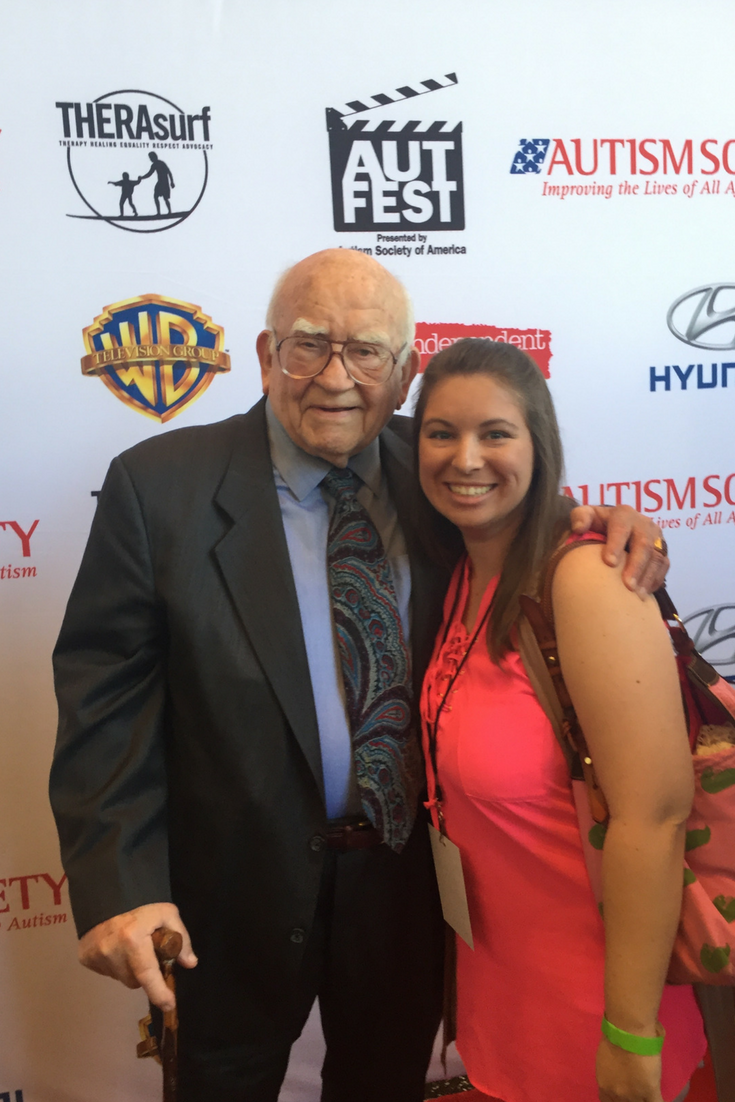 I am so happy that I got the chance to meet Ed. As far as I’m concerned he is a legend! Plus, he is completely precious and adorable. 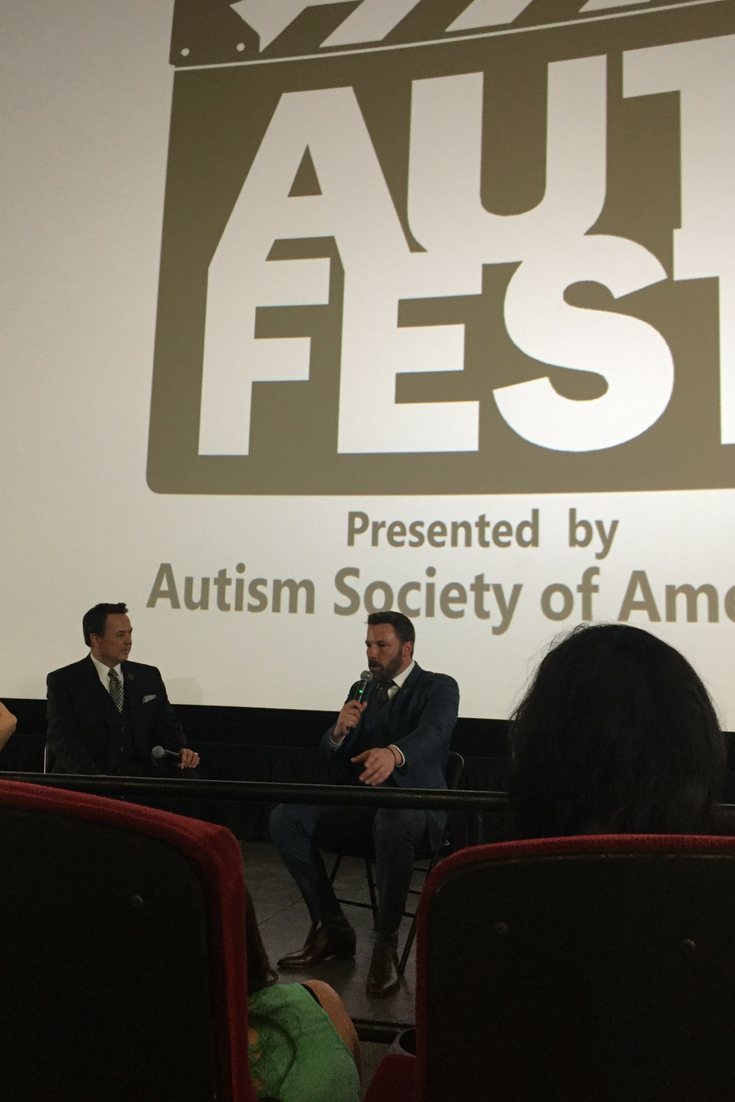 The second screening I attended was The Accountant which came out in the fall of 2016. Ben Affleck plays an autistic accountant in the movie. The movie was really good and Ben’s portrayal of his character was impressive. I had to keep reminding myself that it was, in fact, Ben Affleck in the movie because he was so different in this movie than anything else that I have seen him in. It was such a good reminder of what an incredibly talented actor he is.

Following the screening, Ben arrived to do a q&a. It was wonderful to hear what an impact this movie and role had on Ben. He shared that he has had such a great response from the autism community about the movie. Did you know that they are planning on making The Accountant into a trilogy? In addition to hearing about Ben’s experience in portraying an autistic character we also got to hear a little bit about his career as a whole. One thing that I found very interesting was a comment Ben made that he doesn’t know if he could have made it into acting like an adult without having built a body of work as a child actor.

During the festival, there were nine feature-length films and six short films screened. Two of the short films were written and directed by filmmakers on the spectrum. Peter Docter, Jonas Rivera, and Ben Affleck were all honored for their cinematic portrayals of the complexity of human emotion.

I am so thankful that I had the chance to attend the very first AUTFEST. Next year the fest should be a great experience as well. I cannot wait to see what movies and q&a’s they will have planned for 2018.