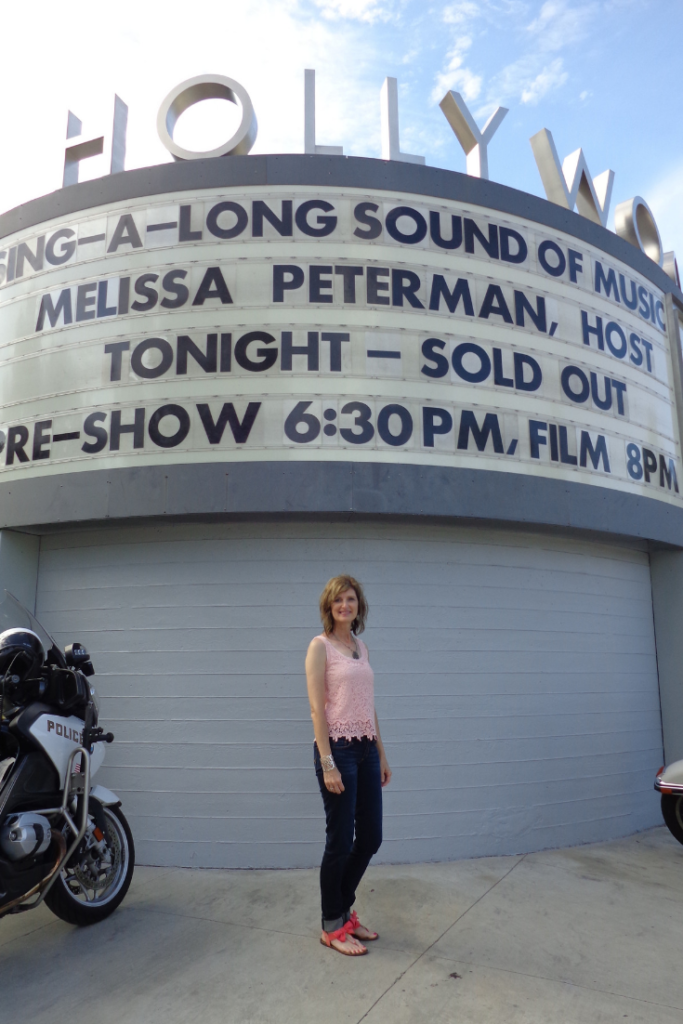 Every summer in Los Angeles you can watch The Sound of Music Sing-A-Long at the Hollywood Bowl. If you want to go to the sing-along next year keep in mind that one hour after the tickets went on sale 75% of the tickets were already gone so plan on buying your tickets as soon as they go on sale. I bought tickets for the park and ride which costs $7 roundtrip if you purchase in advance.

Parking at the bowl costs $22 and can be a nightmare after the event when everyone is trying to leave so be sure to look and see if any of the park and ride locations are near you. My mom and I boarded our park and ride bus around 4:00pm and we were at the bowl before 5:00pm which gave us plenty of time to get food.

We brought our own seat cushions for the wooden bench but if you do not have your own you can rent one for $1. I would also recommend that you bring a blanket because it can get cold at night. The movie did not start until 8:00pm but the pre-show started at 6:30pm. Melissa Peterman, Barbara Jean from Reba, hosted the event and gave some information about the sing along. Everyone was given a fun pack that included props to use throughout the movie.

Inside the packs were an Edelweiss flower, a curtain sample (similar to the curtain Maria makes clothes out of), a popper, an invitation to the Captain’s ball, and two cards to use during the how do you solve a problem like Maria part. She gave us instructions on when to use each item and let us know to boo when Rolf is on the screen and fun things like that. After she finished talking about the fun packs there was a costume parade during which anyone who dressed up as someone or something from the movie could come across the stage. There were five finalists, which unfortunately did not represent the most creative costumes, and the winner won a two-night stay at the Von Trapp Inn in Vermont. The costume parade took around an hour and a half because of how many people dressed up and there were still plenty of people in the audience who had dressed up but didn’t go up on stage.

One of my favorite costumes was a man who had built a frame of a helicopter around his body and had a old-time looking camera, he was supposed to be the helicopter that shot the footage for the opening scene and his wife was dressed like Maria from that scene. There were a lot of families that had the children dressed up in the curtain play clothes which was adorable. One of my other favorite costumes was three little children who were dressed up like the puppets from the lonely goatherd scene and the parents held their puppet strings above their heads which were so precious.

If you want a chance to meet Melissa Peterman or to be on the stage at the Hollywood Bowl be sure to wear a costume. Melissa spoke with at least one person in every group and even gave some people the chance to sing a little bit from the part of one of the songs from the movie. After the costume parade was over she brought up three of the girls who played Von Trapp children in the movie. They all brought members of their families with them and talked about how special it was to have been a part of a movie that has meant so much to people for so many years.

If you like the movie this is such a fun way to watch it because almost everyone there is really into it. Singing the songs out loud with everyone is really fun and they do stop the movie halfway through to allow for intermission. In addition to the sing alongs the Hollywood Bowl also hosts other movie screenings. If you are interested in dressing up Amazon has some great choices.