Earlier this month I was blessed to get to attend my first Kings game. The Kings are the hockey team for Los Angeles and play the Staples Center in downtown. My dad and I were given complimentary tickets to a game through a work perk from a family member. We were really excited to get the tickets and even more excited when we found out that we would get to watch the game from a suite. Our tickets were for a Sunday night game against the Tampa Bay Lightning. 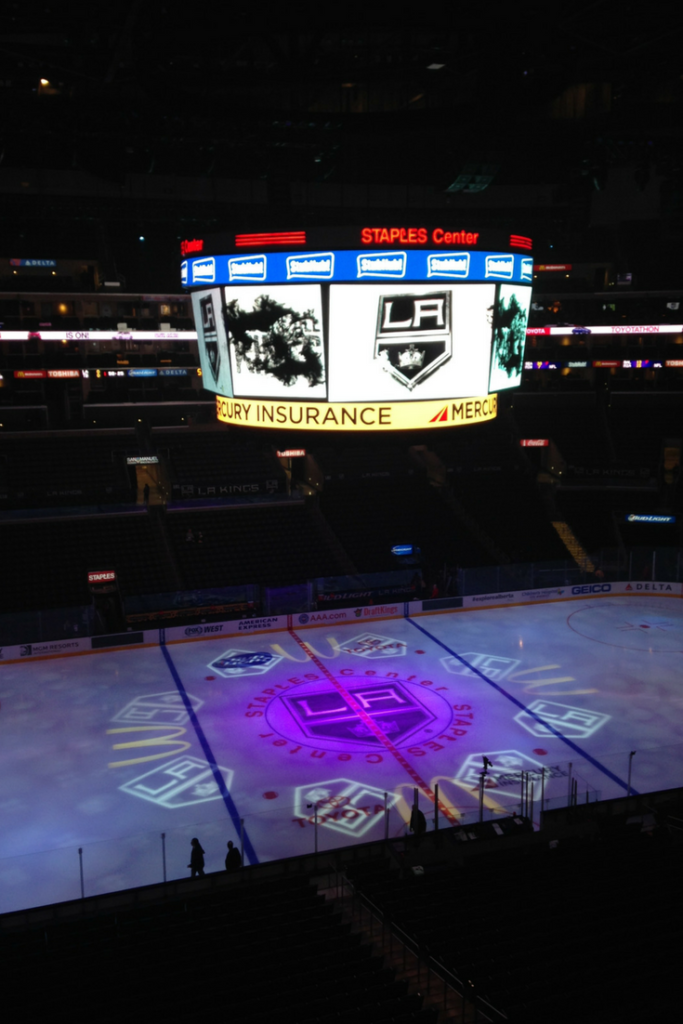 While I had never been to the Staples Center before I knew exactly where it was as I had been to LA Live a few times. LA Live is an area with the Staples Center, the Microsoft Theatre, the Grammy Museum, and some restaurants. If you are going to a Kings game my recommendation for parking is at the Los Angeles Convention Center. Not only is this the closet parking lot but it is also the cheapest with a $15 flat rate. We originally tried parking at the LA Live parking lot which charged $30 but I knew I had seen a $15 sign so we turned around. There is no reason to pay an extra $15 to park further away.

The game started at 7:00pm with the doors opening at 5:30pm. We got to the area around 3:00pm and decided to visit the Grammy Museum before the game. I will be blogging about that experience very soon so stay tuned for that. Outside of the Staples Center was a Coca Cola truck where you could get a free picture with Santa as well as free cans of Coke. My dad and I decided to get our picture taken with jolly Old Saint Nick and we were really pleased that they gave us two free copies of our picture.

Once the doors opened we were instructed to go to a VIP entrance where we were directed to an elevator to take us up to the Delta level. I definitely felt like a VIP as there was someone in the elevator to push the buttons for us. In order to get into the suite, we had to scan our tickets which unlocked the door. We were the first ones to arrive so we had first pick of the seats. There was a bar with food and a couch as well as two rows of seats. I am very fortunate that this was not my first time to get to be in a suite like this but I am always so thankful and really enjoy the experience.

Since we got there early I decided to take some time to explore so I headed back down to the bottom level. The Staples Center has a large selection of food options with just about every type of food you could want. It is really cold since it is an ice hockey game and I have some good news to share with you. They sell hot chocolate! The minute I stepped inside and felt how chilly it was all I could think of was hot chocolate. However, even with warm drinks, I would still recommend for you to dress on the warmer side. In addition to the food locations, there are also some fun booths set up.

About twenty minutes before the game was supposed to start I made my way back up to the suite. At this point the players were on the ice warming up. Once the players were done warming up the zamboni’s came out to smooth the ice. A few years ago my mom & I got the ride the zamboni at a Predators game which was really fun. When my mom and I got picked to ride the zamboni someone came into the suite that we were in and said she was looking for two zamboni riders if we were interested. After doing some research on riding the zamboni at Kings games it looks like an experience that can be purchased. Make sure to reach out to the Kings directly through their website for more information on that.

Did you know that you can write a message and have it displayed on the scoreboard? If someone in your group is celebrating a birthday it is a fun touch to have wished them a happy birthday on the board. Do you like to sing? You can send in a tape of you singing the national anthem to be considered to perform it on the ice at a game. What an incredible memory and experience that would be. A ten-year-old sang at the game that I went to and with her talent, it was hard to believe that she was so young. For more information on ways to make your time at the game even more special click here: http://kings.nhl.com/club/page.htm?id=41356

Lots of goodies were given out to lucky sections during the game like tickets to Knotts Berry Farm, a week of free parking at LAX airport, free popcorn, and more. If you download the Kings app your phone will sync with the light show which was pretty cool to see. I liked that they made thing interactive for smart phone users without distracting from the game.

The game itself was really fun and enjoyable. One of the main reasons of course is that the Kings are a great team. However, I enjoy hockey and all that the games have to offer so I still would have had fun even if the Kings were not good. The game consists of three periods that last for 20 minutes with two fifteen minute breaks. If you want to leave for food or to use the restroom I would wait until the break so that you don’t miss a thing. The Kings won the game three to one which I was thrilled about. My first time at the Staples Center was an awesome one and I cannot wait to go back for another sporting event.

Whether you are a local or are visiting the Los Angeles area on vacation I would recommend attending a Kings game if you are a hockey fan. Hockey games are really fun to attend and even if you are unfamiliar with hockey the game is pretty easy to follow. The Staples Center is located in downtown Los Angeles and is not too far from places like Universal Studios or other tourist attractions in Hollywood. Be sure to keep an eye out because you never know what celebrities you might see in the crowd since you are in Los Angeles.