I have no doubt that my love and appreciation for music comes from my Dad. When we were planning what to do during his recent visit to see me I recommended going to the Grammy Museum. I figured it was something that both my Dad and I would enjoy. My Dad and I went to an LA Kings hockey game at the Staples Center at LA Live in downtown Los Angeles. Also in the LA Live area is the Grammy Museum. We decided that we would arrive early so we could have time to go to the museum before the game.

After parking at the Los Angeles Convention Center, which was the cheapest and most convenient parking for the hockey game, we walked towards the entrance to the Grammy Museum. The Walk of Fame in Hollywood is famous for the stars with names of well-known actors, singers, directors and more. Outside the Grammy Museum is a Grammy Walk of Fame which listed the Record of the Year, Album of the Year, Song of the Year and Best New Artist for various years.  I love little touches like this as I was not expecting to see this on the walkway. Before our visit to the museum, I did my research to make sure we were getting the best deal on our tickets. The tickets are $12 but if you are AAA members like us you can get your ticket for $10.

I did not know what the museum would be like and I was very excited to get to explore it. We were given a map when we walked inside and directed to the elevators to take us to the top floor. Once you exit out of the elevator you are in a room with projections on both sides of the room with speeches from various Grammy winners over the years. There are also Grammy awards in glass cases to show how the award has changed in appearance over the years.

Something that I really appreciated about this museum is that there are a lot of opportunities to play instruments or sing in booths without bothering the people around you. In the picture above I am playing the drums with the headphones on. I could hear what I was playing but my Dad who was taking my picture could not. With all the hands-on musical opportunities throughout the museum, it could easily be a loud and obnoxious place but everything has been taken care of so well that it is quite peaceful to walk through. The museum does not solely focus on Grammy nominees and winners but also sheds light on the different types of music as well as a wide variety of instruments.

The Grammy Museum has been blessed with some very special pieces from music history. In the picture above on the right are costumes worn by Michael Jackson in some of his music videos. The bottom left of the picture shows lyrics from the song What The World Needs Now. The picture on the top left shows a ticket and invitation to the 50th Grammy Awards Show as well as a Grammy medallion from Tiffany & Co. There is a lot to see on the three main levels of the museum and if you were to stop inside every booth to sing or play an instrument you could easily spend four or five hours inside. My Dad and I had allotted two hours which ended up being perfect for us. We were able to explore the museum at our own pace and saw everything that we wanted to see.

The last exhibit that we saw in the museum was the Frank Sinatra exhibit. His exhibit is located right outside of The Clive Davis Theater which was showing clips from Frank Sinatra concerts. We sat down and watch a few songs. Frank was older during the concert we saw but his voice had not aged and was still so smooth and lovely to listen to. I really enjoyed the Frank Sinatra exhibit and liked seeing the pictures from various years and moments in his life. There was a booth that we went inside where you could record yourself singing with Sinatra which was fun. This exhibit helped me learn more about the man whose voice had captivated my attention so many years ago.

While the Grammy Museum has four levels only the top three have exhibits. For $12, $10 for those eligible for a discount, it is well worth the money. If you are visiting the Los Angeles area and plan on purchasing the GO LA card the Grammy Museum is one of the many locations included in your fee. The museum is a great family friendly place to go which can be enjoyed by all ages. If you will already be in the LA Live area for a Lakers, Clippers or a Kings game I would encourage you to make time to go to the Grammy Museum. The exhibit on the second level which is currently where the Frank Sinatra exhibit is changes a few times a year. If you are interested in seeing the Frank Sinatra exhibit you will want to go sooner than later if possible.

The Disneyland Hotel Is Perfect For Disney Fans 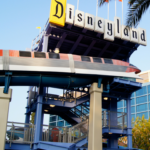