I am so excited to finally have The Wizarding World of Harry Potter Hollywood at Universal Studios. Have you been wanting to try butterbeer ever since Ron, Harry & Hermione had their first one? My Mom and I split a frozen butterbeer which is a butterscotch flavored drink with a frothy cream at the top. It was sweeter than I was anticipating and even though we got a small it was hard for us to try and finish it. The taste is very nice and refreshing but it is rich. I opted to get it in a regular cup since the souvenir stein did not look very nice. Even if you only have it once I think butterbeer is one of those things that you have to try when in Hogsmeade. 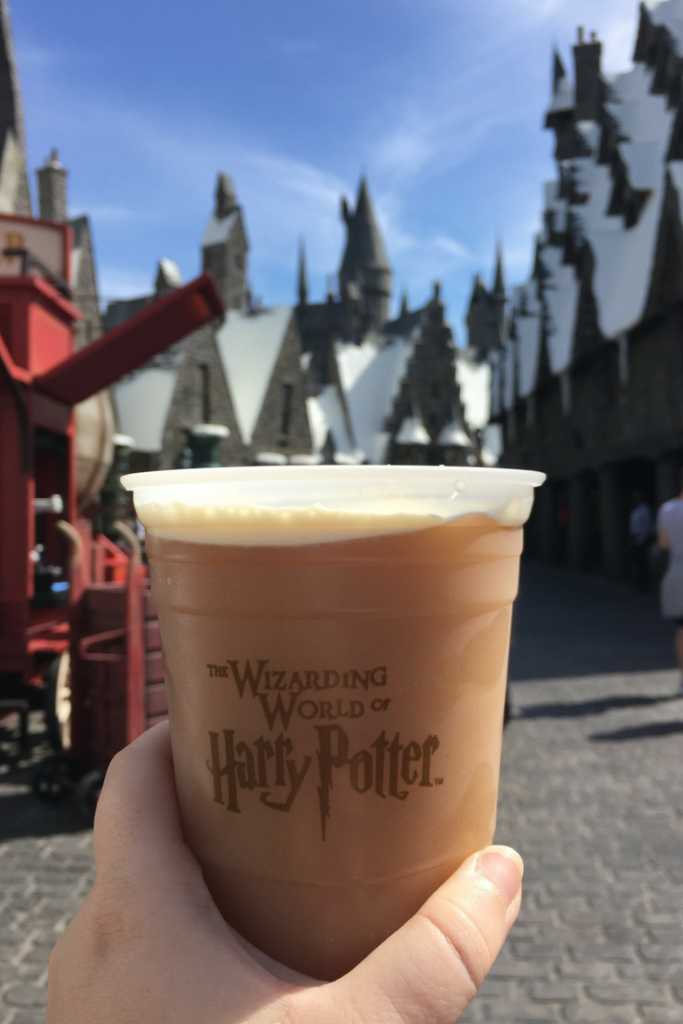 Once we got our butterbeer we headed to Hogwarts to ride Harry Potter and the Forbidden Journey. The plan was to enjoy our drink as we waited in line which is the perfect idea for a busy day. We were shocked to see that the posted wait time was 5 minutes! The workers for this particular ride wear the Hogwarts dress robes as they are all students. Once we entered the line we found lockers to store our items. The lockers are free for up to two hours which is awesome. We put everything in a locker except for our point and shoot camera that has a hand strap. It is not recommended to keep anything with you as there is a risk of dropping it on the ride but we really wanted pictures of the castle.

The line for the attraction took us through the greenhouse and into a hallway where we saw the glass containers holding the points for each of the four houses. We then passed the entrance to Dumbledore’s office. Another blessing about the area being so empty was that we were able to stop in line to take pictures without bothering anyone. I would have loved to have taken a picture in the hall of all of the paintings and portraits but it was so dark throughout a lot of the castle that it was hard to get good pictures. Dumbledore’s office was my favorite of all of the places we saw in Hogwarts. When we got to the front of the line we were handed 3D glasses and immediately put on the ride.

The seats for this attraction are rather small which means that not everyone will fit. They do have seats at the entrance of the attraction so that you can see upfront whether or not you will be able to ride. If there is a chance someone in your party won’t fit it is best to know upfront before waiting in line. As I age I am becoming more prone to motion sickness though I did okay on the ride. However, if I had eaten beforehand it would have been a different story. It is a very fun ride and well done though there were some places where I closed my eyes to help with motion sickness. There is also an outdoor roller coaster, Flight of the Hippogriff, but I did not wish to ride it on this visit.

I was ready for lunch after the ride so we headed to the Three Broomsticks. We stopped at the restroom to wash our hands and laughed when we heard Moaning Myrtle. They thought of everything! Moaning Myrtle is a Hogwarts ghost who lives in the restrooms. We were handed a menu as we walked in the door and saw a display of all of the food. My Mom chose to order fish and chips while I opted for chicken with potatoes and corn on the cob. Both of the meals were delicious though we agreed that the chicken and potatoes were the best. I will be returning here for food on my next visit to Universal Studios Hollywood though I will be getting a regular free cup of ice water. The Gillywater was not bad but it tasted almost identical to the free water my Mom had.

There were different shows going on while we were in the area but we did not stop to watch any though they sounded fun. We wanted to make sure we had time for shopping so we headed to Ollivanders wand shop first. There was a line on the side of Ollivanders and we weren’t sure what it was for but decided to check it out. We were led inside a different entrance than the regular one for the wand shop. Once inside we were given instructions, one of which was that there could be no flash photography.

The wandmaker appeared and led us inside another room.  He then selected me to participate in the wand show. Those who are familiar with Harry Potter know that the wand chooses the wizard. The wandmaker had me try out various spells with different wands until one seemed to click with me. It was really fun though I did feel bad that in a room of 20 people I was the only one who got to do this. I had not been planning to buy a wand and the wand show did not change my mind as the wand that picked me was not my type. There are two types of wands that you can buy. There are regular wands and special wands that are interactive with various windows in Hogsmeade. I had to giggle when one lady asked if the special wands would work in the real world.

We had so much fun going in all of the shops which were filled with great things. Both my Mom and I got a t-shirt representing a different house at Hogwarts. I bought the most comfortable Gryffindor sweatshirt which I love. I wanted to buy everything inside Honeydukes which is filled with magical candies and sweets. They have chocolate frogs, cauldron cakes, and more! It all looked so delicious though I was full from my lunch so I did not buy anything. However, I know in the future I will have to get something from there. Writing about this makes me so excited for my next visit.  I loved visiting the Wizarding World of Harry Potter and will be back time and time again.

I loved getting to see Honeydukes!

You can check out my complete guide to Universal Studios Hollywood here.