Las Vegas is a favorite getaway for Angelenos. The drive is short enough that you can make it from Los Angeles to Vegas in under five hours. During a road trip, it is always nice to have places to stop and stretch your legs. Here is a list of where to stop from Los Angeles to Las Vegas. Some of the stops can be very quick while others will consume more of your time. I suggest deciding upfront how long you want your drive to take and then plan your stops accordingly.

The Site of the Original McDonald’s 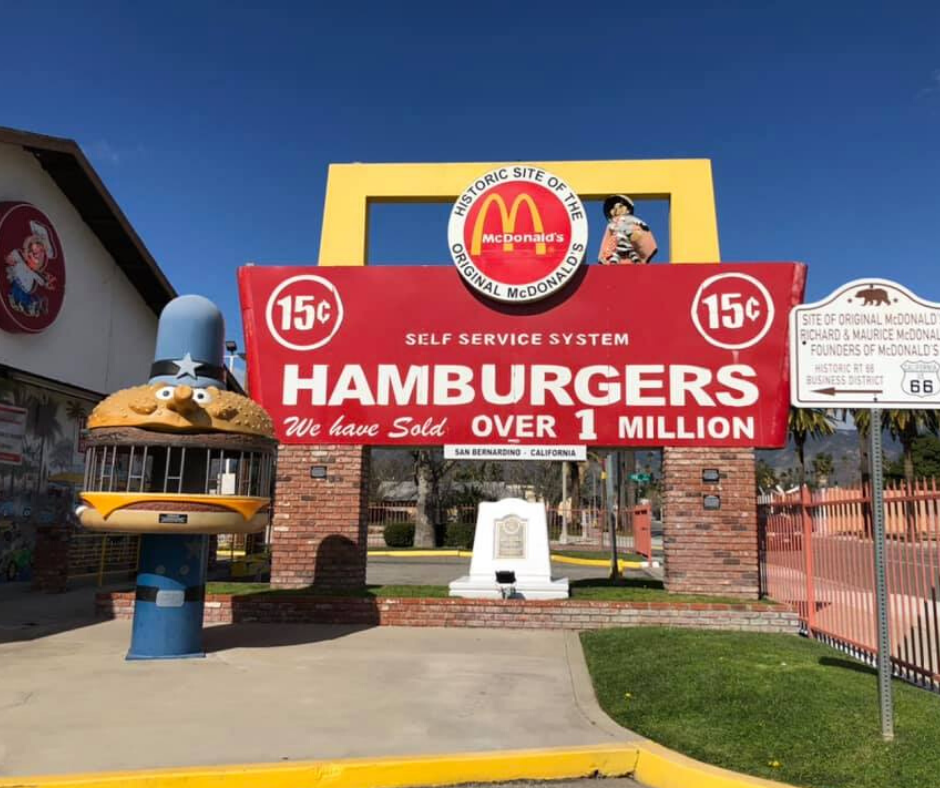 On a recent road trip to Las Vegas, I stopped by the original McDonald’s in San Bernardino. All that remains is the sign but there is a mini-museum with a bunch of random McDonald’s merchandise. I want to be honest and let you know that this is not a glamorous stop. However, it is interesting to come here at least once.

It should be noted that even a small visit to this stop will cost you. The price is $8 per adult. That being said though this is a cute place to visit at least once. Though now that I’ve been I don’t have a desire to go back. The ghost town is small but has its fair share of things for you to do. I mainly just walked around to explore but they have a train ride, you can pan for gold and eat at the restaurant. This is a place that could be fun for all ages but especially the little ones. 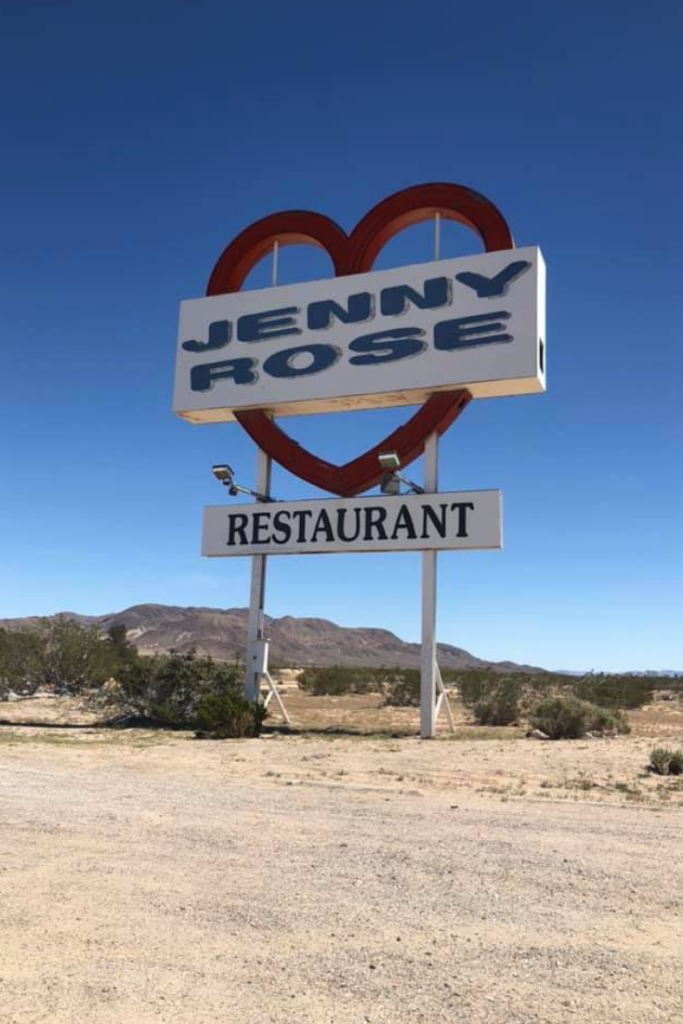 The same exit that you take for the Calico Ghost Town will also take you to this Jenny Rose sign. It was used as the album cover for the debut of Sheryl Crow. Even if you don’t go to the ghost town if you need to stop for gas you can grab a quick photo. 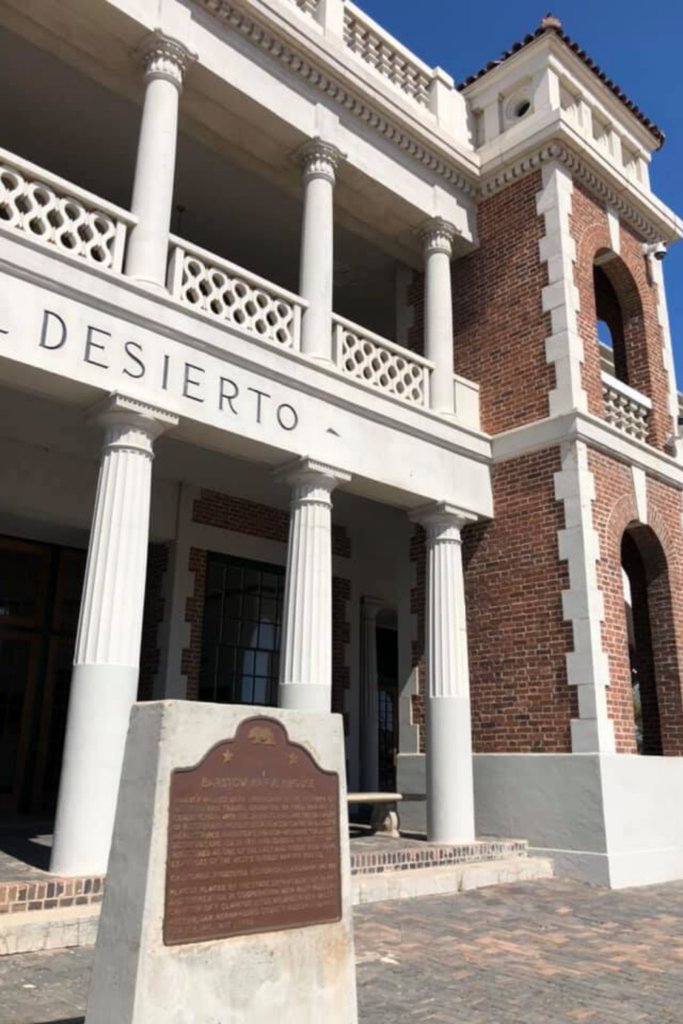 This stop was never planned but when I saw a sign on the highway saying it was a historical point of interest I wanted to stop. I have watched the Judy Garland movie the Harvey Girls so I was curious to see a Harvey House. The building was closed we when got there but there were a few trains that we could take photos of. 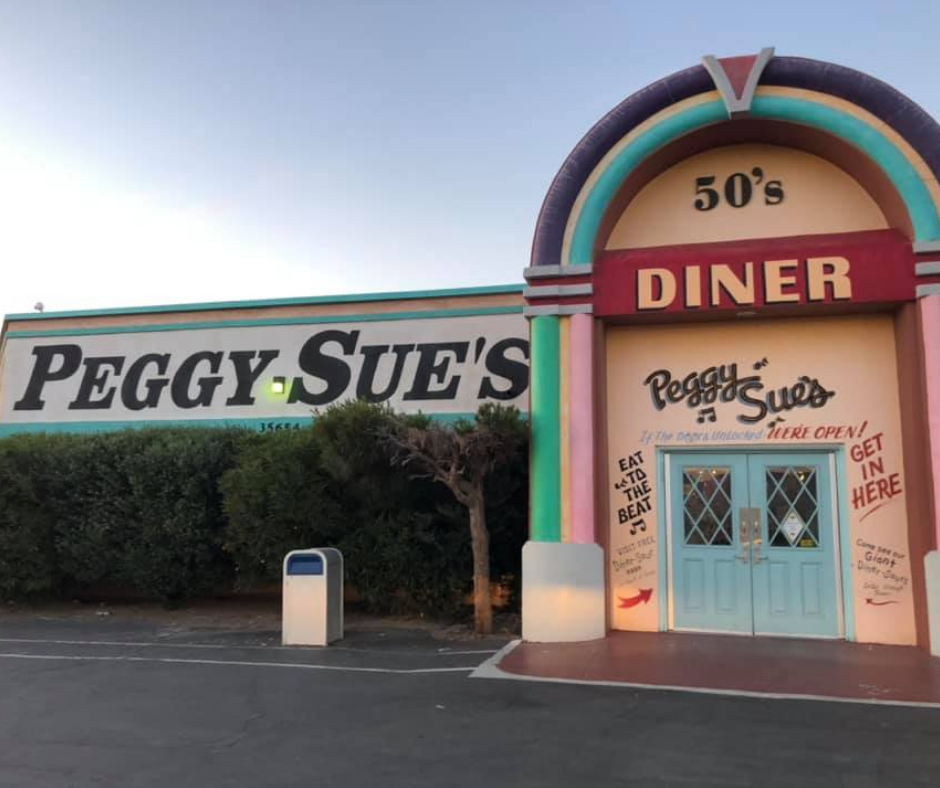 Peggy Sue’s diner was on almost every single list that I found of places to stop from Los Angeles to Las Vegas. However, while I’m putting this on the list I don’t want to get your hopes up. This is a small and not too clean-looking place indoors. I was really excited about what I thought would be a great experience and it was average at best. The two items I wanted from the menu they were out of and the waitress acted annoyed with me as if I should have known. I did get a milkshake as I felt like I should at least get something since I had gotten a table. A lot of people love it so check it out if you’d like. 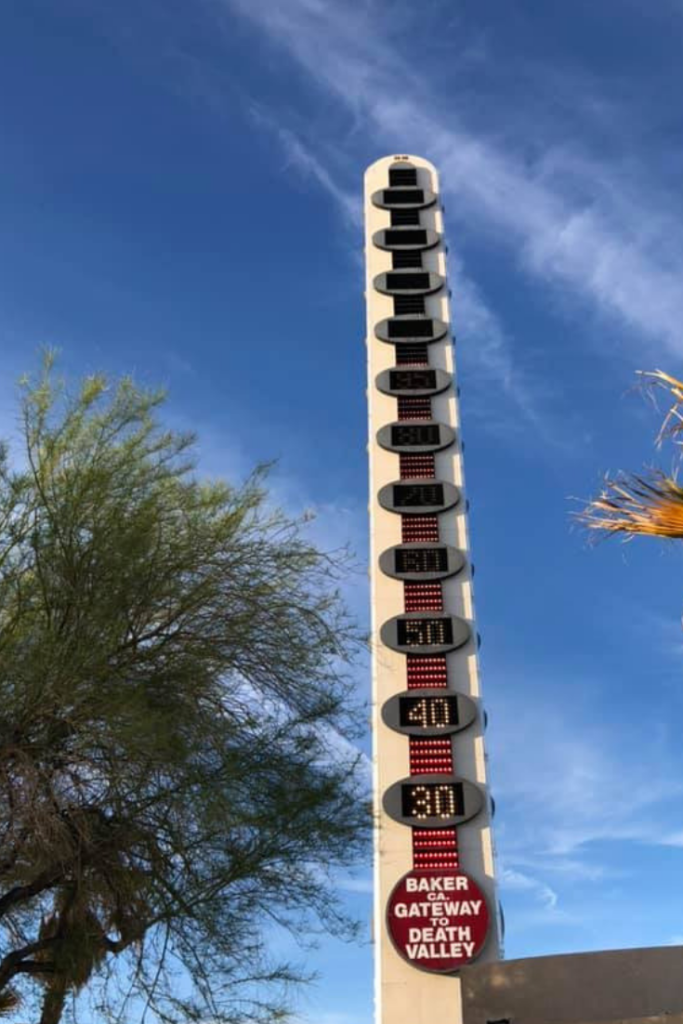 This gigantic thermometer is located in Baker. It is a quick pit stop for a chance to see something unique.

The Bonnie and Clyde Death Car

You can see the Bonnie and Clyde death car in the lobby of the Whiskey Pete’s casino just past the state line on the Nevada sign. This is a great restroom stop with a chance to see some interesting pieces of history. 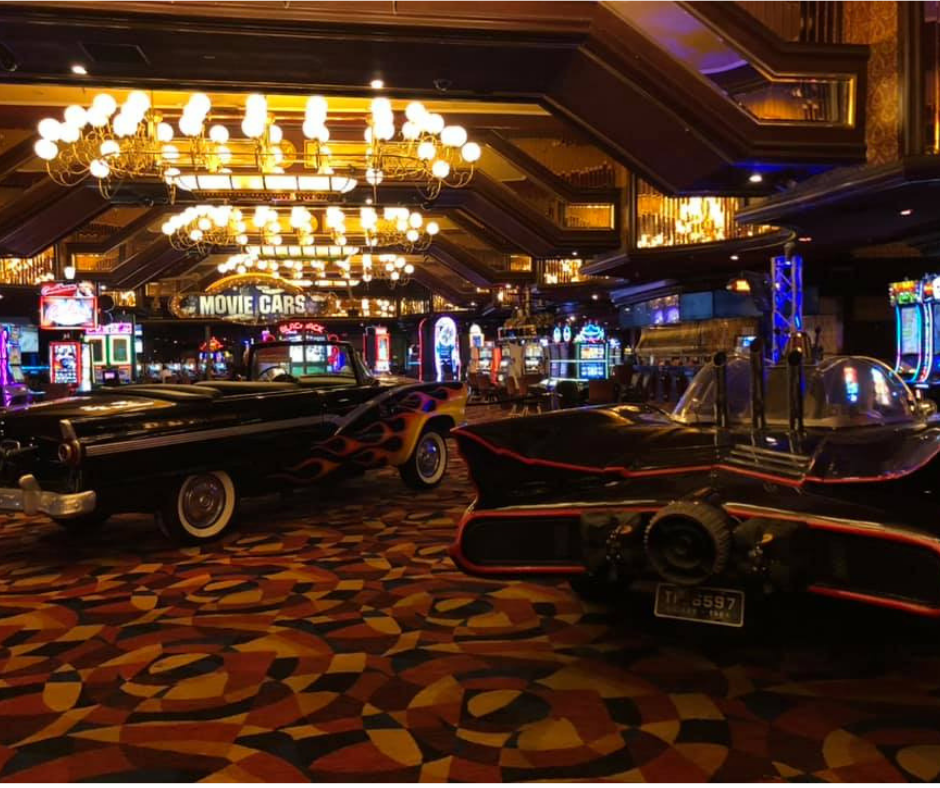 The Terrible’s casino has a small display of movie cars. They have one of the Adam West Batmobiles as well as the car from Grease Live. Another quick stop but it was a good one.

My favorite stop of all was to see the colorful rocks at the Seven Magic Mountains. This art installation has been rumored to get removed for a while now but it keeps getting extending and I hope it stays. The rocks have attracted quite a crowd so unless you go incredibly early you’ll find the space loaded with people trying to get their photos. 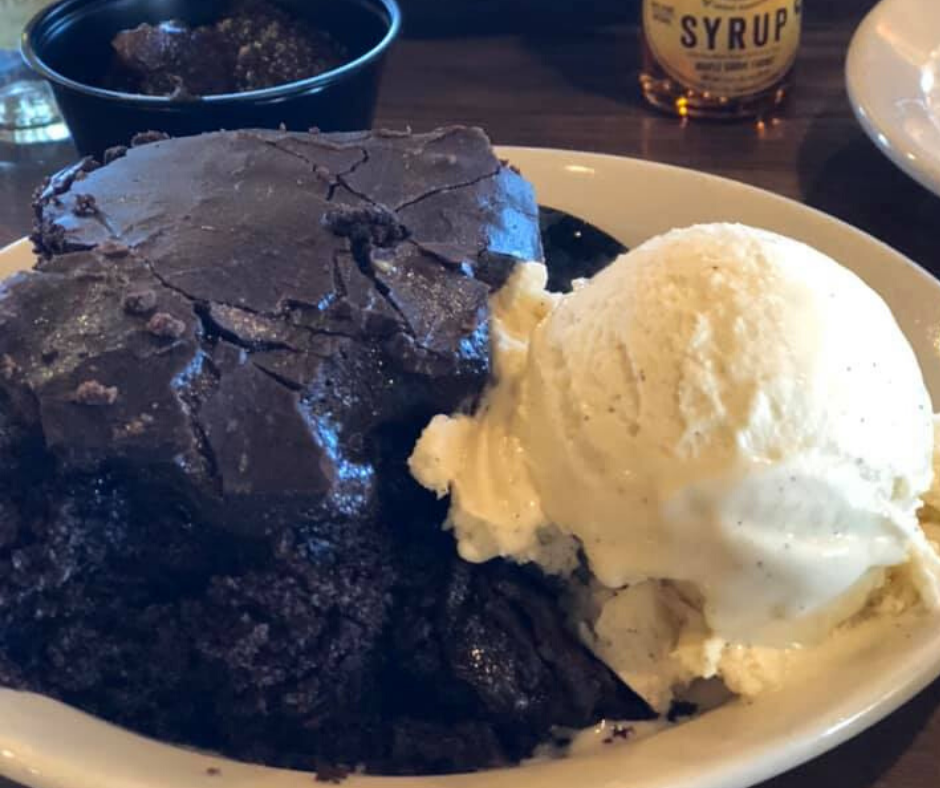 Hopefully, this helps give you an idea of a few places to stop on your drive. If you’re going to stop for gas or the restrooms might as well do it in a place where there is something fun to see! 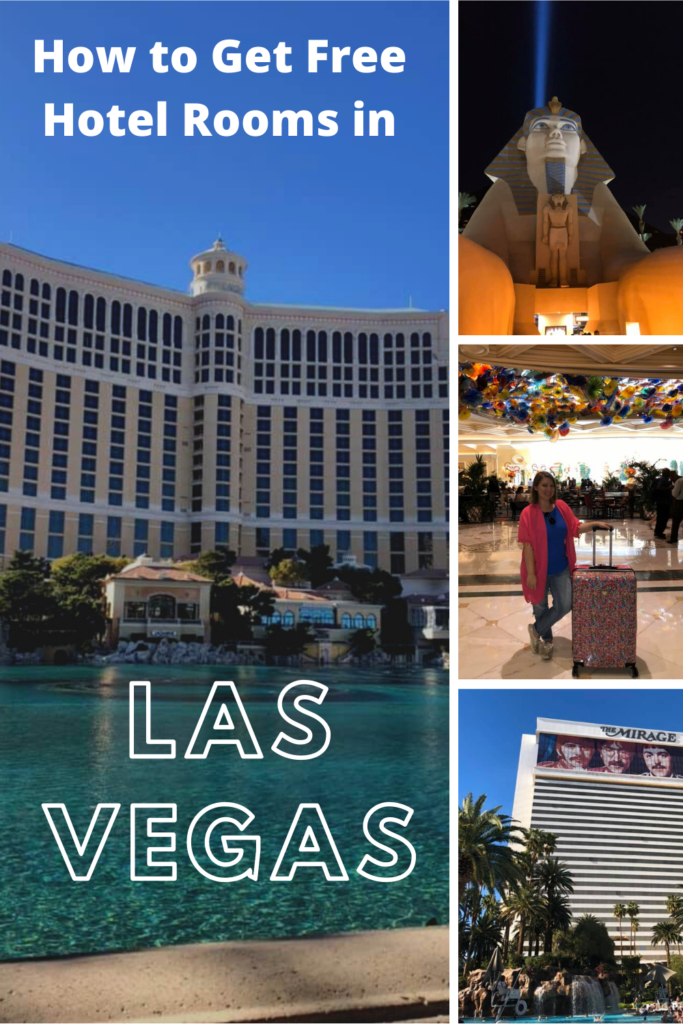 Would you like to learn how to get free hotel rooms, free show tickets, and more in Las Vegas? Check out this post here.

You can also find out about other road trips to take from LA in this post.