What Is Ace Comic Con 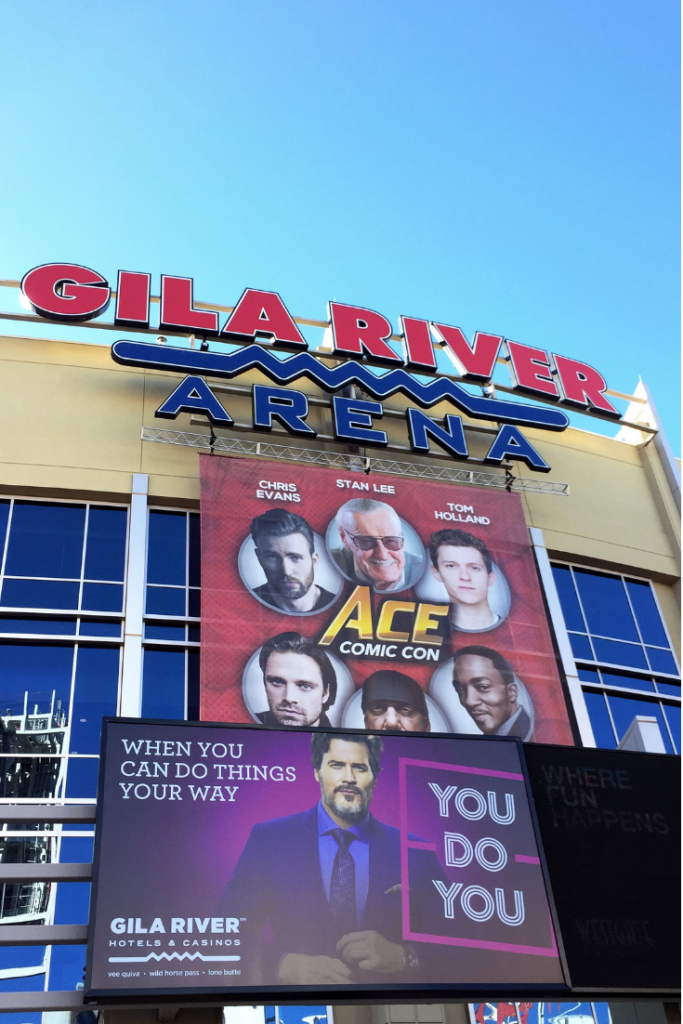 Ace Comic Con is a new convention that has had hosted two cons so far. In 2017 they hosted Ace Comic Con Long Island in New York and earlier this year they hosted Ace Comic Con Glendale in Arizona. Each of the two cons had quite a few big names attached to the shows. Henry Cavil and Gal Gadot were among the celebrities that fans could pay to meet in Long Island. Chris Evans, Sebastian Stan, and Stan Lee were a few of the big stars that brought fans to Glendale. In addition to photo ops with the stars, fans could attend panels and browse several booths that were set up all over the arena.

What Do Ace Comic Con Tickets Include

There are two types of tickets that can be purchased to get inside the Ace Comic Convention. You can purchase a general admission ticket or a VIP ticket. The main differences between the two tickets are some extras like a special badge and early entrance. I recommend that you save your money by not buying the VIP and put the saved money towards autographs or meet & greets. The panels with the talent were available to anyone with a ticket. However, any meet and greets or autograph ops were additional costs.

The first thing we did once we got inside was grab a seat for the panel with the actors from the Captain America movies. Chris, Anthony, and Mackie discussed what working together has been like. They seemed to have great respect for each other. Chris mentioned that Robert Downey Jr. has been incredibly welcoming on the sets of the Avengers movie. They talked about the upcoming Avengers Infinity War. 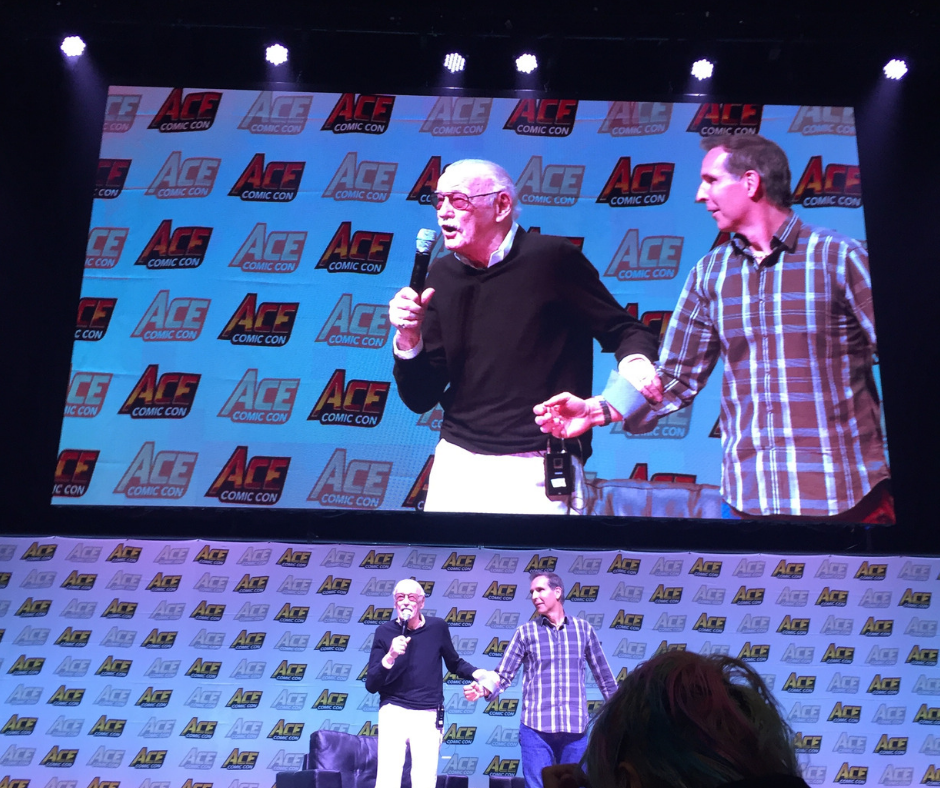 The next panel we attended was with legend Stan Lee. Todd McFarlane hosted the panel and he asked Stan about how he got started in the business. Stan is a great example of someone who truly worked his way up from the bottom. When he first started in comics he was an errand boy. After a while, he began helping out on the comics and eventually found himself at the top.

The reason that Stan used the same letters for his characters is that it was easy for him to remember. If he could remember that Spiderman’s first name was Peter then Stan knew his last name started with a P too. Towards the end of the panel fans sitting in the front could line up to ask Stan a question. I was able to ask Stan which one of his canoes was his favorite. His response was that his favorite cameo was in Thor because it is the only time he has had two scenes. Stan completely impressed my friend and me. He was so adorable and such an inspiration & encouragement!

How To Meet Chris Evans at Conventions 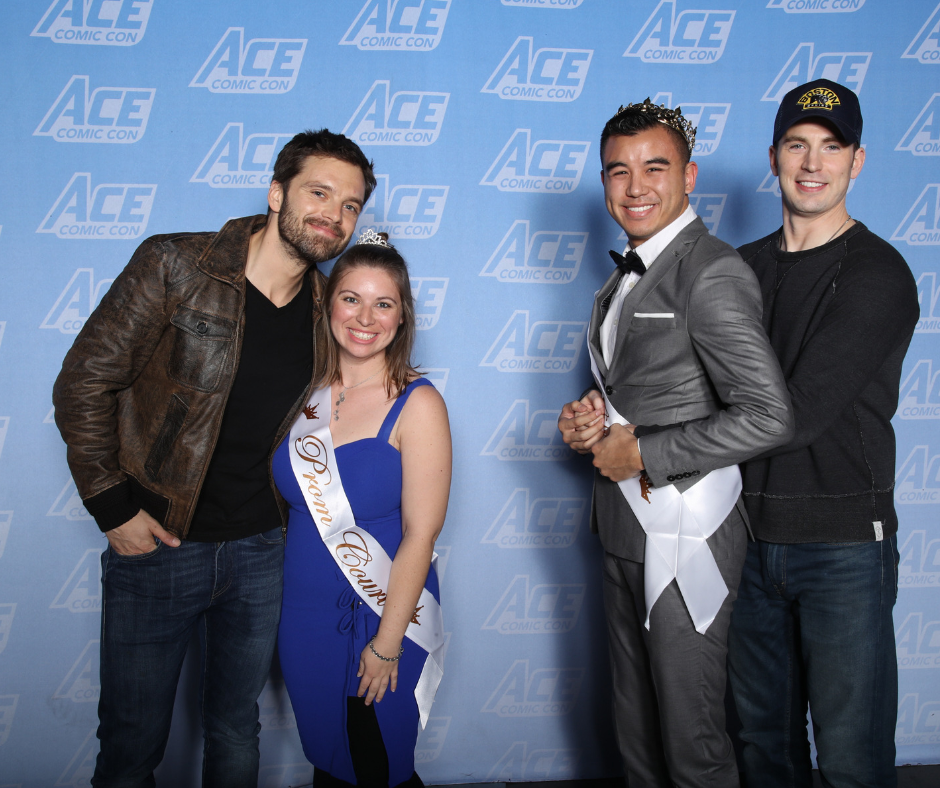 My friend Bruno came up with the idea for us to take a prom-themed photo with Chris Evans and Sebastian. He brought the sashes and crowns for them as well but we were told at the last minute that props were not allowed. However, when I later looked up other pictures on instagram it seems like some fans were able to bring props in so you can try it in the future if you’d like.

On the Ace Comic Con website, they clearly state the photo op is not a meet & greet. I think that is a very fair way to word this encounter considering how quick they move the fans in and out for photos. It was one of the quickest interactions I have ever had in my life. Luckily, I lingered for a second to ask Chris for a hug but we were with them for under one minute. That is something to keep in mind should you do one of these photo ops in the future. Yes, you do get to meet them and get a picture but you are not given a chance to say more than a few words if that. I do love our picture and it was a really fun experience even though it was over too quick!

Would I recommend attending a future Ace Comic Con event? Yes, as long as you really want to meet at least one of the stars who is attending. The only downside is that there is no guarantee that you will get to meet the stars that you buy an autograph or photo op for. On the second day of the Ace Comic Con Glendale, Chris Evans became sick and canceled all of his photo ops. This meant that fans from across the United States that flew in to meet him but had the photo op on Sunday instead of Saturday did not get to meet him. That’s a risk that you take at these events which is something to keep in mind.