For our podcast episode, I spoke with Disney Travel Blogger Lindsey. She has an incredible Instagram account and blog that I love following. You can listen to the podcast through Apple Podcasts, Spotify, Google Podcasts, Amazon Music, iHeartRadio, Stitcher, or Podbean.

The two lands of the park that we are going to focus on are Buena Vista Street and Hollywoodland. Some of the locations that inspired DCA no longer exist, but there are several that you can visit or at least drive by. This could make for a fun Disney in LA day to discover some of the places.

Let’s kick this off with the very first thing you see when you enter DCA. The design for the park entrance was based on the Pan Pacific Auditorium. For those of you who have been to Hollywood Studios at Walt Disney World, you might know that they have the same gates for that park as well. The Pan-Pacific Auditorium opened in 1935 and served as a leading entertainment venue for over 35 years. 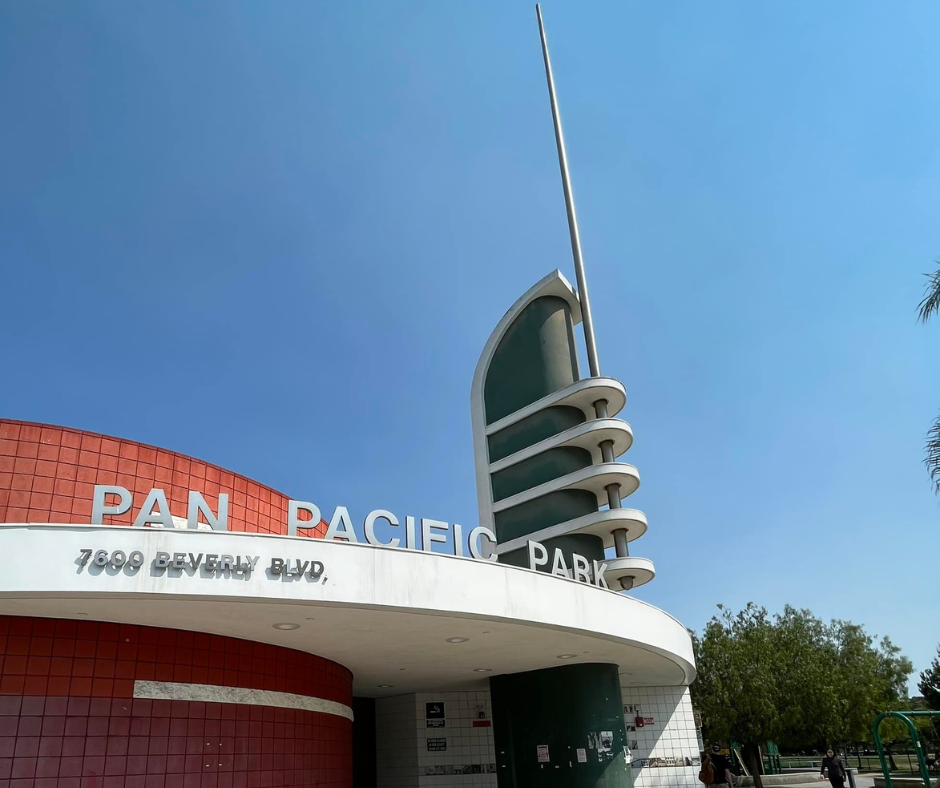 Unfortunately, the auditorium was destroyed in a fire and all that can be seen now of the design is part of a building at the Pan Pacific Park. The building is not in the best of condition but it was still nice to see that something that was still around that resembles the entrance. I stopped by the park when I was in the area going to The Grove and the El Coyote Restaurant.

I cannot wait to put together a reel showcasing the real LA locations that inspired Disney California Adventure Park with footage of the real-life locations. That is a work in progress but thankfully Lindsey has photos comparing the buildings on her site.

One of my favorite photo ops, when you walk down Hollywood Blvd in Hollywoodland, is the painted wall at the end of the street. While it is only painted on the wall and is not a building or a facade in the park, I love seeing the El Capitan as part of the painting. Seeing a movie at El Capitan is a must-do for Disney fans. You can read about my experience with El Capitan Theatre here. 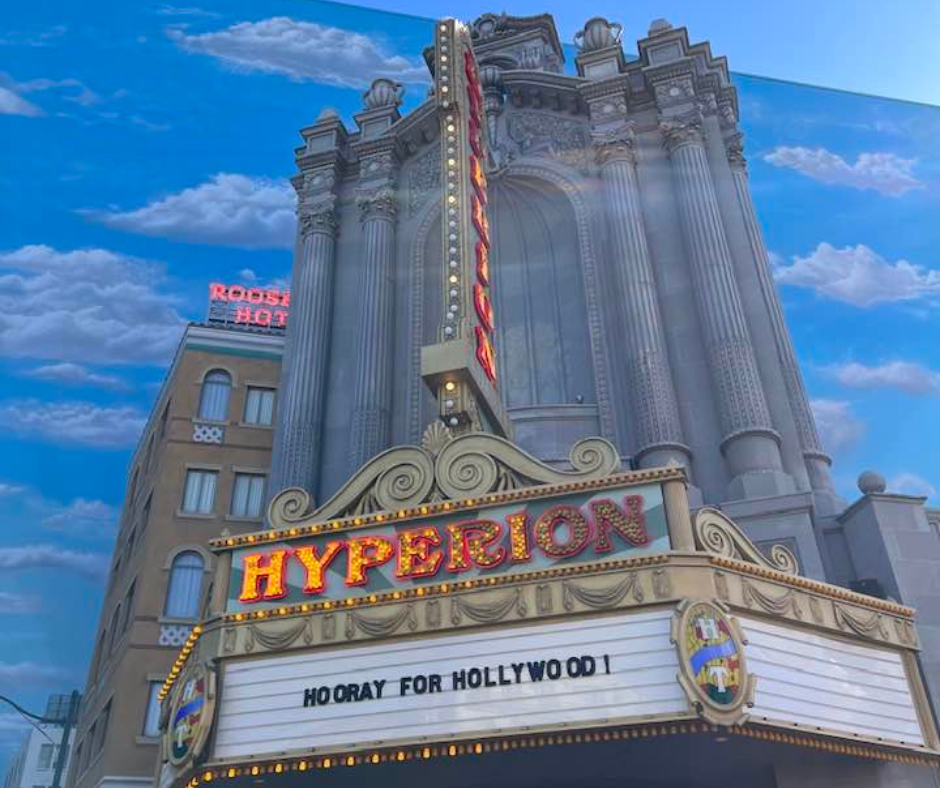 This is currently not home to any shows at DCA, but previously the theatre was home to productions of Aladdin and Frozen. The real-life inspiration for the Hyperion Theatre is the Los Angeles Theatre in DTLA. The Los Angeles Theatre is one of my favorite movie palaces from the Golden Age of Hollywood. It is only open to the public for special events but is absolutely worth a visit. One of the ways to experience the theatre is through an annual event called Last Remaining Seats where classic movies are shown during the summer months.

The original Walt Disney Studios was located on Hyperion which is how the theatre got its name. 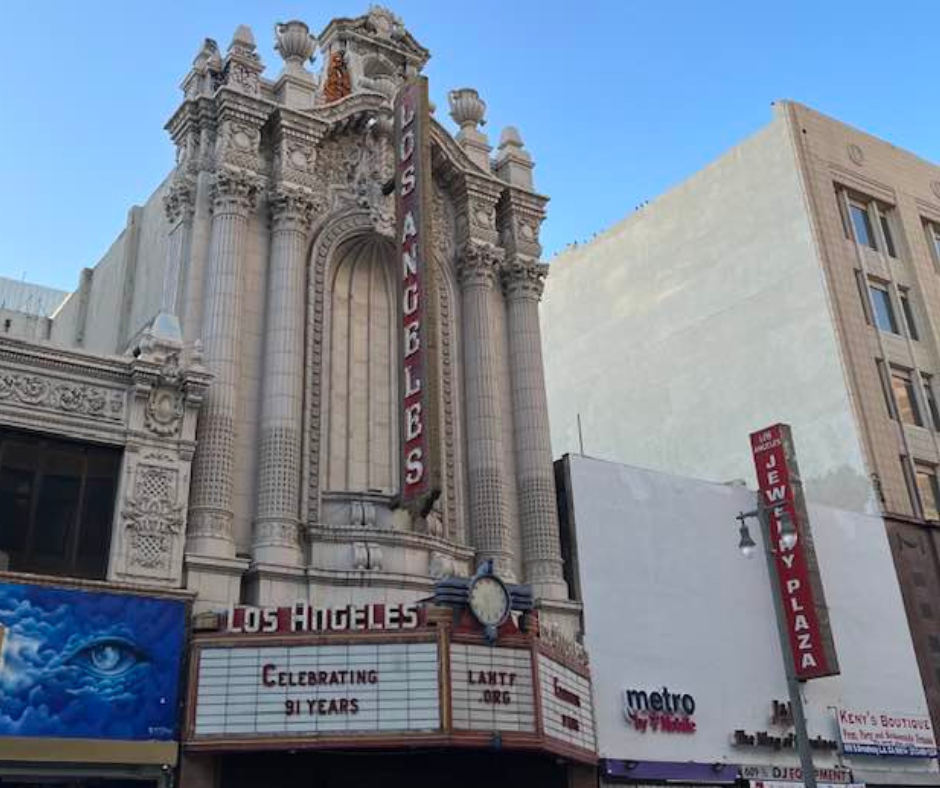 The Facade next to the Hyperion Theatre

To the right side of the Hyperion Theatre is an attached facade that is based on the exterior of The Beverly Wilshire Hotel. Fans of Pretty Woman might be extra excited to visit this location in person. 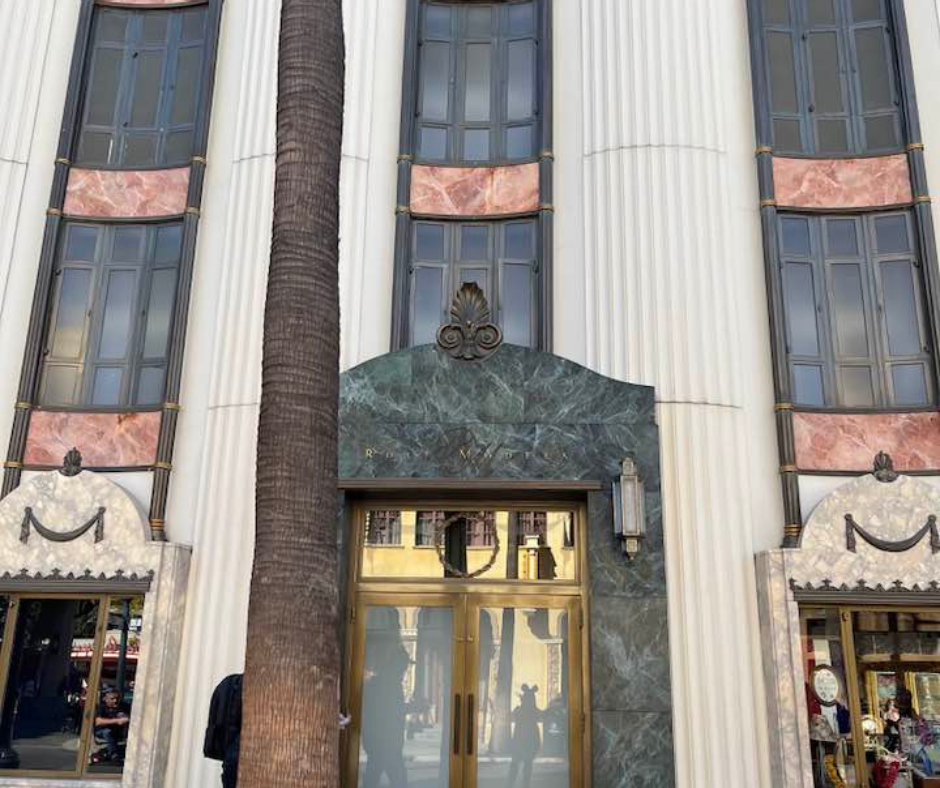 Role Models is located in the front of the Animation Building at DCA. The exterior is inspired by the Max Factor building in Hollywood. Max Factor became an icon in the makeup industry and even received an Oscar for his work. The building has now been turned into the Hollywood Museum. If you are interested in Hollywood History and love seeing props, costumes, and memorabilia the Hollywood Museum is worth a visit. I visited using the Go LA Pass which gives you access to several places in the LA area for one set price. 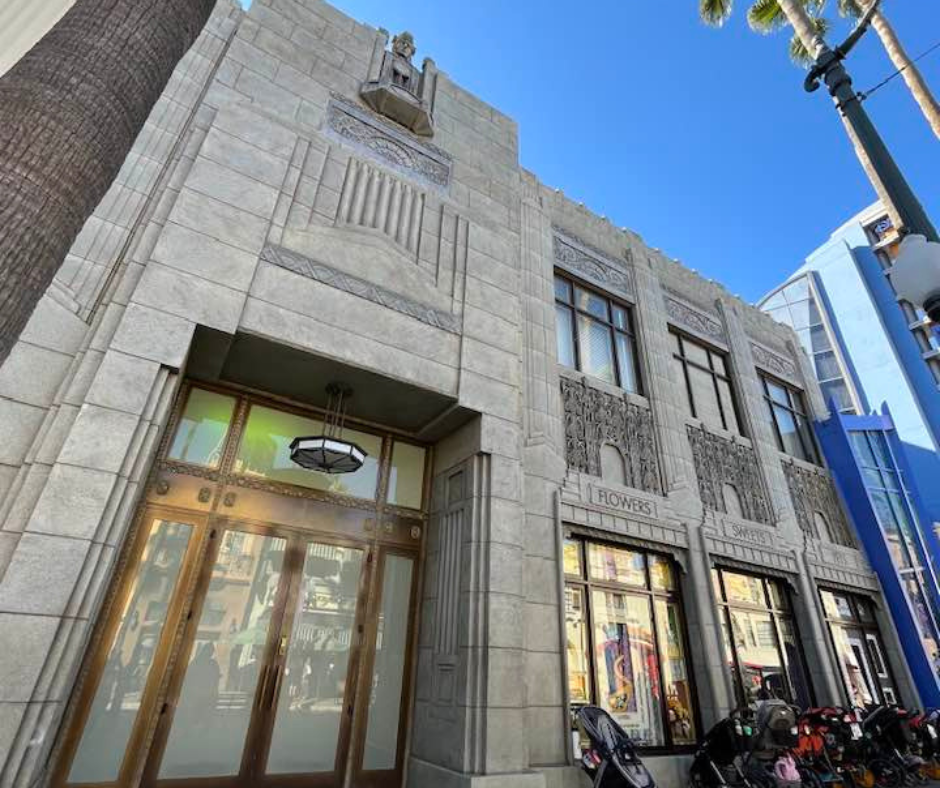 This is another facade outside of the Animation building. The inspiration for this building is the incredible Pantages Theatre which is one of the most incredible locations to see a Broadway-style show in the LA area. 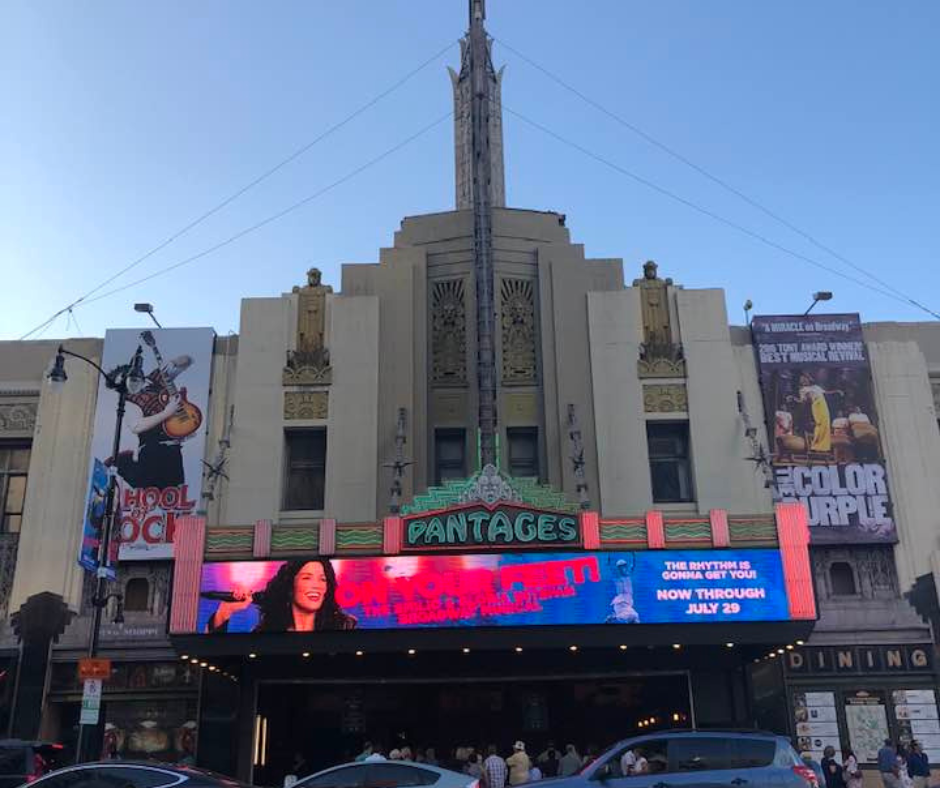 Off the Page is one of my favorite stores in the park. This is one of the best places to look for collectible items and artwork. The exterior is based on the Chapman Market in Koreatown.

Schmoozies is a popular spot if you want a milkshake (though I always go to Ghiradelli myself) and smoothies. The exterior is inspired by Crossroads of the World on Sunset Blvd in Hollywood. 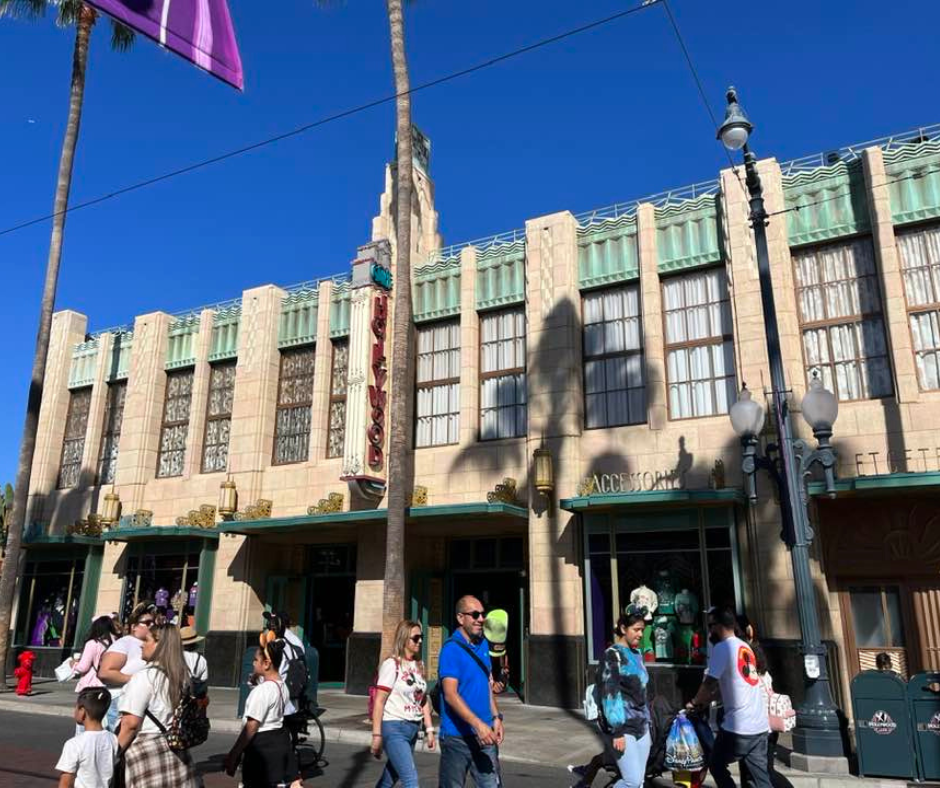 Bullocks Wilshire was once it store for the Hollywood Elite so it makes sense that it would be represented in the park, especially as the exterior of a store. While the real Bullocks Wilshire store is no more, you can still see the gorgeous exterior in person. 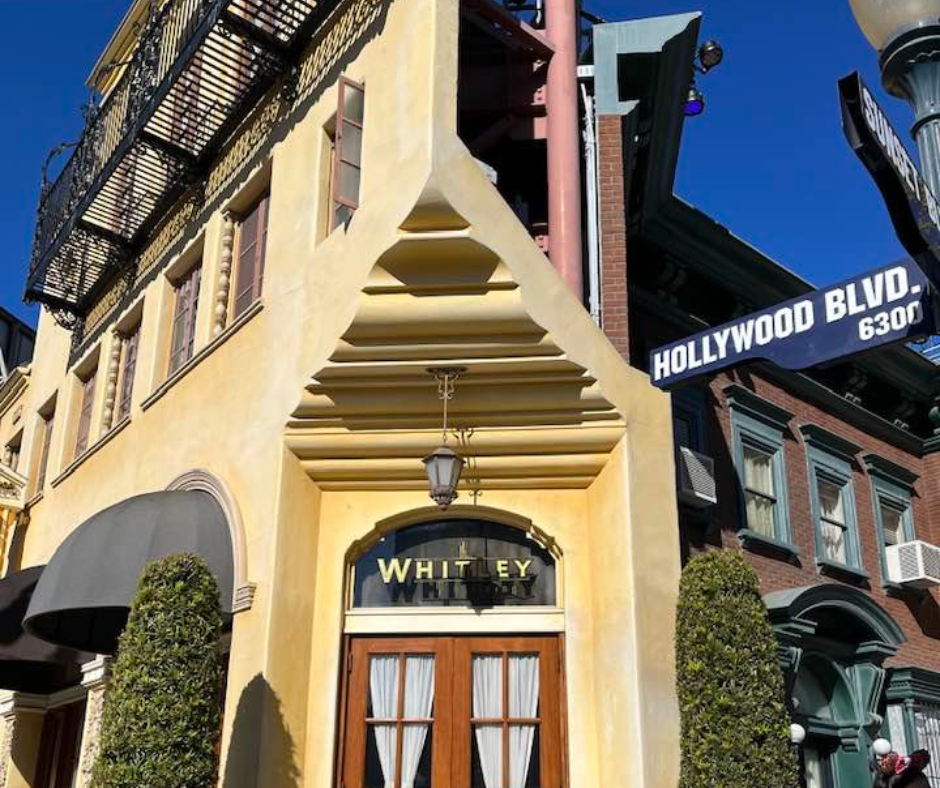 I will forever be sad that the Tower of Terror got replaced in Hollywoodland. Yes, I do appreciate that it still exists at other parks like Hollywood Studios in Florida and Walt Disney Studios in Paris but it was so perfect for DCA. There are three locations that it was based on, the Millennium Biltmore hotel which is such a spectacular place to visit in DTLA, the Hollywood Tower Apartments, and the Mission Inn in Riverside. The Mission Inn is truly an incredible and special place to visit if you are willing to travel out to Riverside.

If you are a big Disney fan you might enjoy my blog post on a Disney Day in LA covering other Disney experiences you can have outside of The Disneyland Resort.