Old Hollywood Glamour can still be found in Tinseltown. You can step back in time with dinner at Musso & Franks or the Formosa Cafe. You can watch a movie at the TCL Chinese Theatre and the El Capitan Theatre on Hollywood Boulevard both of which provide a special experience. While there are so many different places that I can and will recommend that you check out to experience Old Hollywood Glamour, I would like to focus on the five that were featured on the LA Dreaming Podcast. I spoke with radio host Lara Scott about this topic and can’t wait for you to listen.

When Lara and I were beginning our conversation she mentioned two organizations that I want to share with you. The Art Deco Society of LA and the LA Conservancy. We mentioned one of my favorite summer movie events, Last Remaining Seats, which the LA Conservancy hosts in May and June. They reopen the beautiful movie palaces in order to show classic movies. 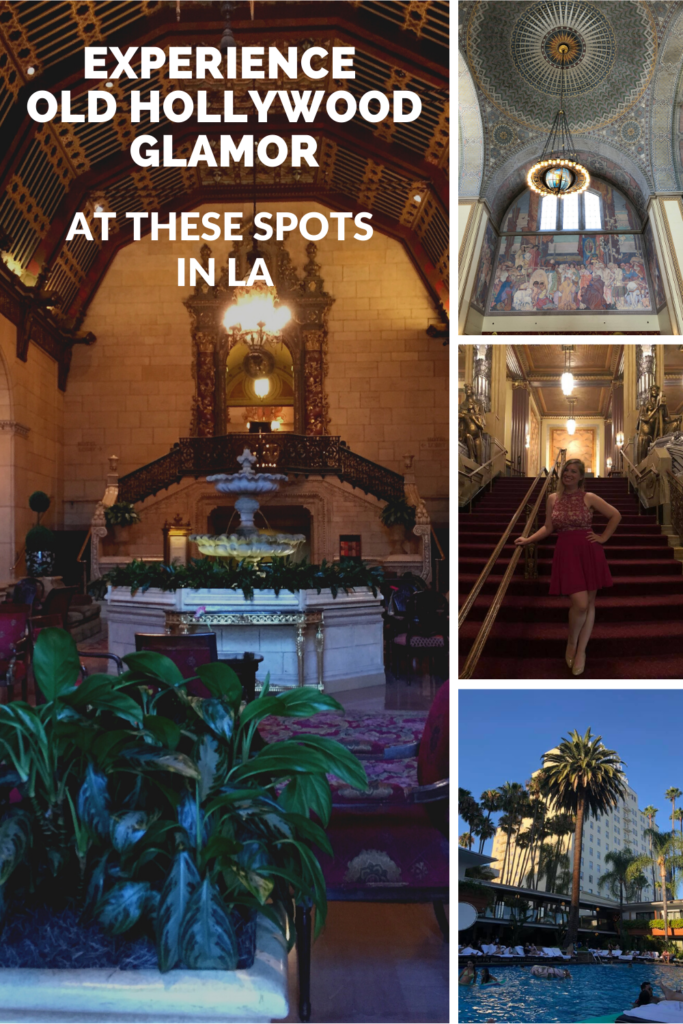 The Hollywood Roosevelt is an icon located on Hollywood Boulevard. It is close to the TCL Chinese Theatre and the Magic Castle. It is one of the many spots that the Hollywood Walk of Fame is in front of. It is very easy to include a visit to the Roosevelt during your time in the area. I have been to the Roosevelt many times for special events like the Turner Classic Movie Festival as well as for dinner at 25 Degrees. I’ve even celebrated a friend’s birthday at the Spare Room which is a cool bar at the hotel with two bowling lanes.

The Hollywood Roosevelt is steeped in Hollywood history. The Blossom Ballroom was home to the very first Academy Awards. Carol Lombard and Clark Gable used to frequent the penthouse which is now named for them. There is a Marilyn Monroe suite on the second level of the hotel which served as her home for two years.

Shirley Temple tap-danced on these Spanish-style steps with Bill “Bojangles” Robinson. This hotel is a must-see for Old Hollywood Glamour.

One of the things that I really appreciate about the Roosevelt is all of the ways that people can experience the hotel even if they are not staying here. From special events to rooftop yoga, to movie screenings at the pool, and to enjoying the bars or restaurants there are so many things you can do. Yoga and the movie screenings are typically free for guests and cost $20 or more for non-guests to participate.

I was blessed to get the chance to stay at the Hollywood Roosevelt as a guest for $40 thanks to a for your consideration event for The Marvelous Mrs. Maisel. You can read about that experience here. 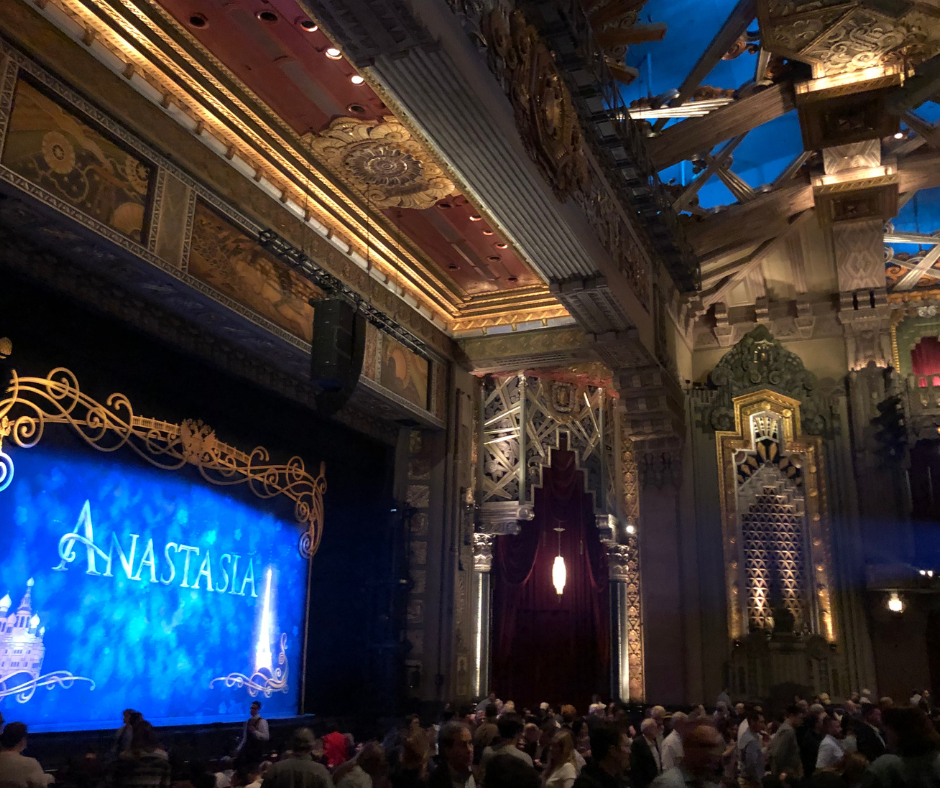 While we have several places to enjoy live theatre in LA none of them provide Old Hollywood Glamour like The Pantages. This is one of the most beautiful art deco buildings in Los Angeles. Just like the Roosevelt, this was also once home to the Academy Awards. It began as a vaudeville theatre before becoming a movie theatre. Since the 1970’s it has served as LA’s favorite live theatre with so many great national shows coming here. On your way to the theatre be sure to look for some musical theatre legends on the Walk of Fame. The star for Sir Andrew Lloyd Weber is out front. 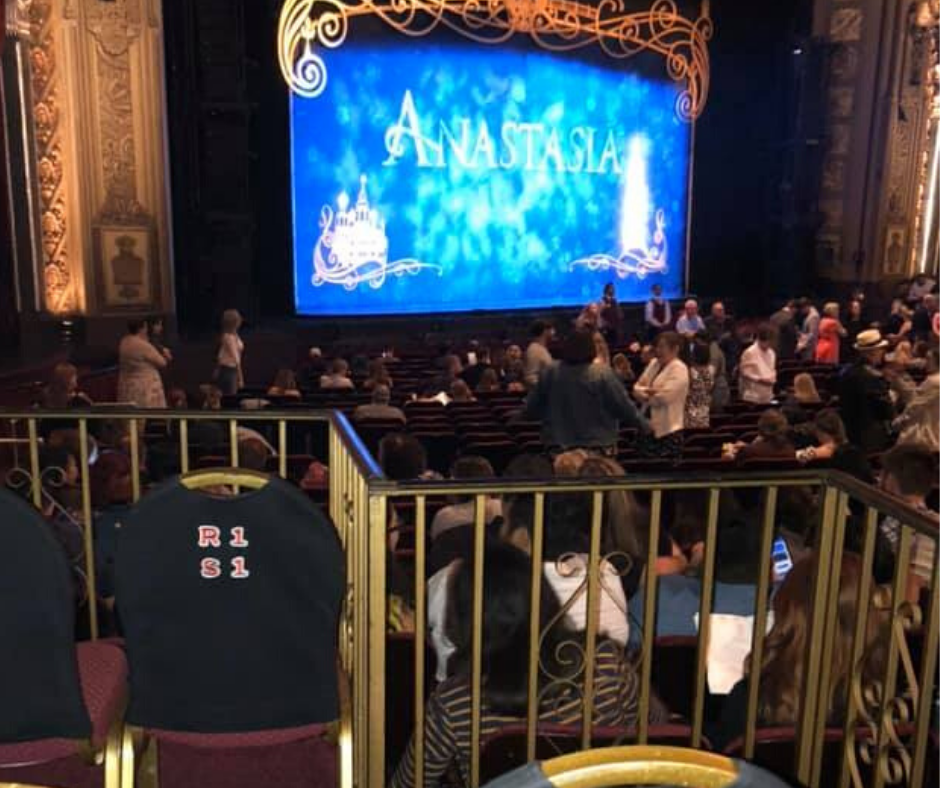 I love finding seats on the side sections of the orchestra level. For Anastasia, an usher moved my Mom and I so we could sit together and we would up in a section thanks to her. The seat I was in was $38 before service fees and is fabulous for people who don’t want someone tall in front of them or would like extra legroom. The section is WCORCL. Fabulous seats for a great price. 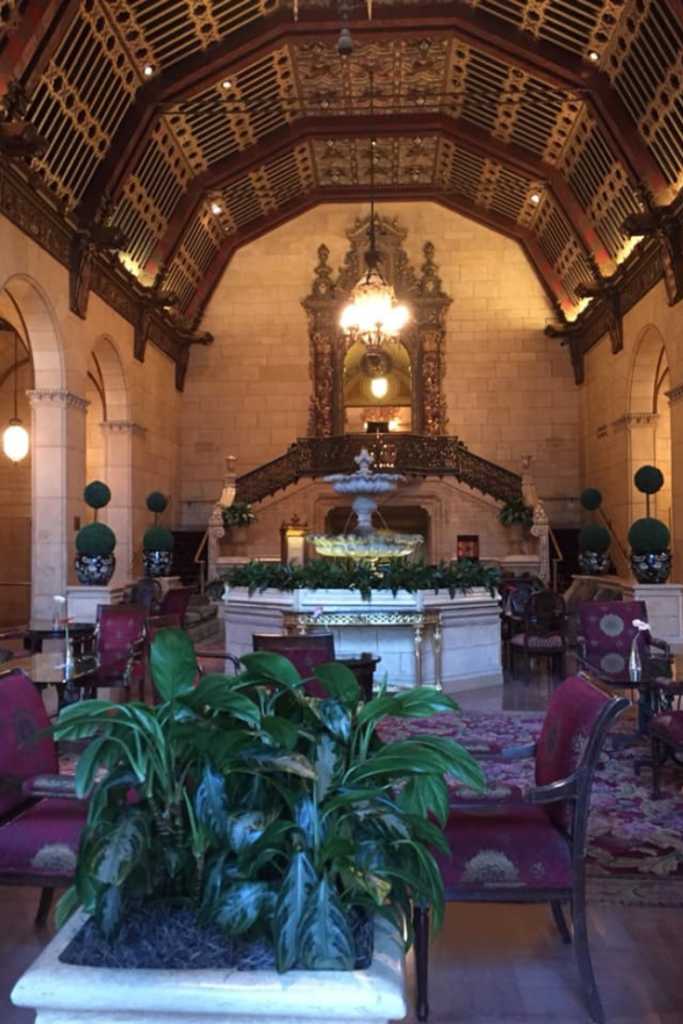 You have most likely seen The Millenium Biltmore Hotel in a movie or tv show that you have watched. It has served as a filming location since 1924. This is one of the most elegant hotels in Downtown Los Angeles. It is worthy of a visit, even if you only come and walk around. Lara shared that the rendezvous court, shown above, was originally the lobby for the hotel. It is now primarily used for afternoon tea, what a special experience that would be.

Keeping with the theme of our first two locations, The Millenium Biltmore Hotel was also used for the Academy Awards for a period of time as well. It is also rumored that the Oscar statue sketch was made at this hotel. Not only is this beautiful place filled with Hollywood history, but it is also an important part of LA history as well. 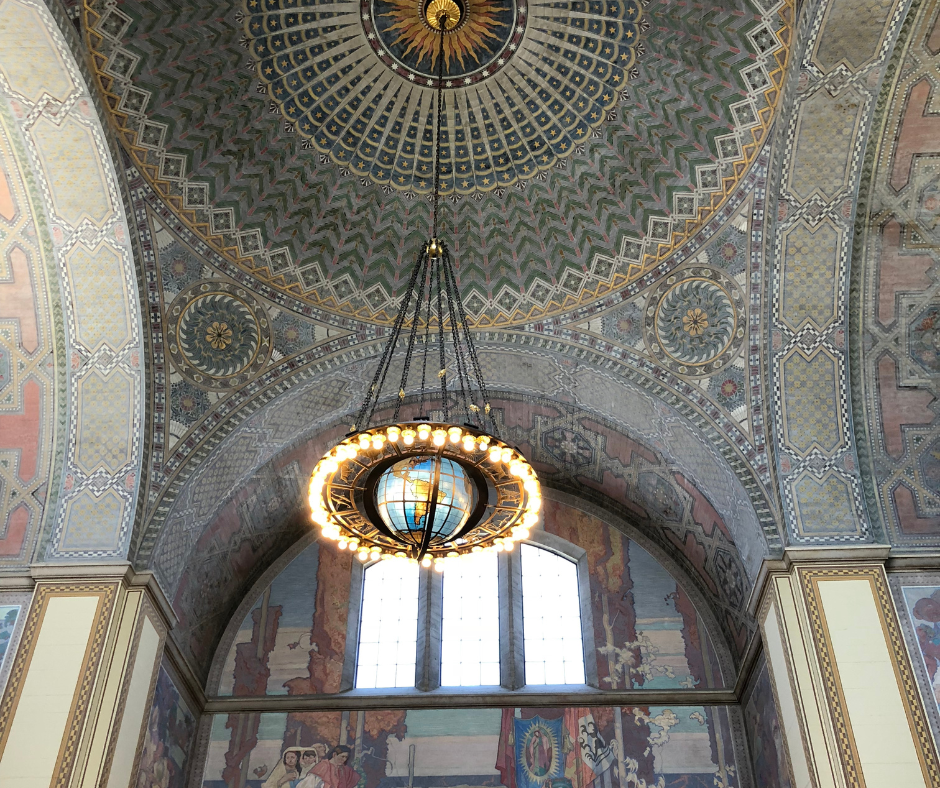 The Los Angeles Central Library was built in 1926 and is a DTLA landmark. It is across the street from the Millenium Biltmore Hotel so it is easy to combine these two stops in one visit. The library is gorgeous, the artwork and beauty really make this building even more spectacular. It feels like history really comes alive here.

There are so many incredible resources that you can take advantage of with an LA public library card. Once you have your card check out the Discover & Go attraction list through the website. Use this link to see a list of museums and experiences you can enjoy for free including a tour with the LA Conservancy.

Thank you so much to Lara for introducing me to this special place. Old Town Music Hall in El Segundo shows classic movies in a way that you have probably never experienced. Your evening begins with music on the Wurlitzer organ followed by a cartoon or short, there might even be a sing-a-long for you to participate in with songs from the time period of the movie being shown. They also host screenings of silent movies with the music accompanied by the Wurlitzer. I saw Rebel Without a Cause when I came here. It is truly a place that classic movie fans will appreciate.